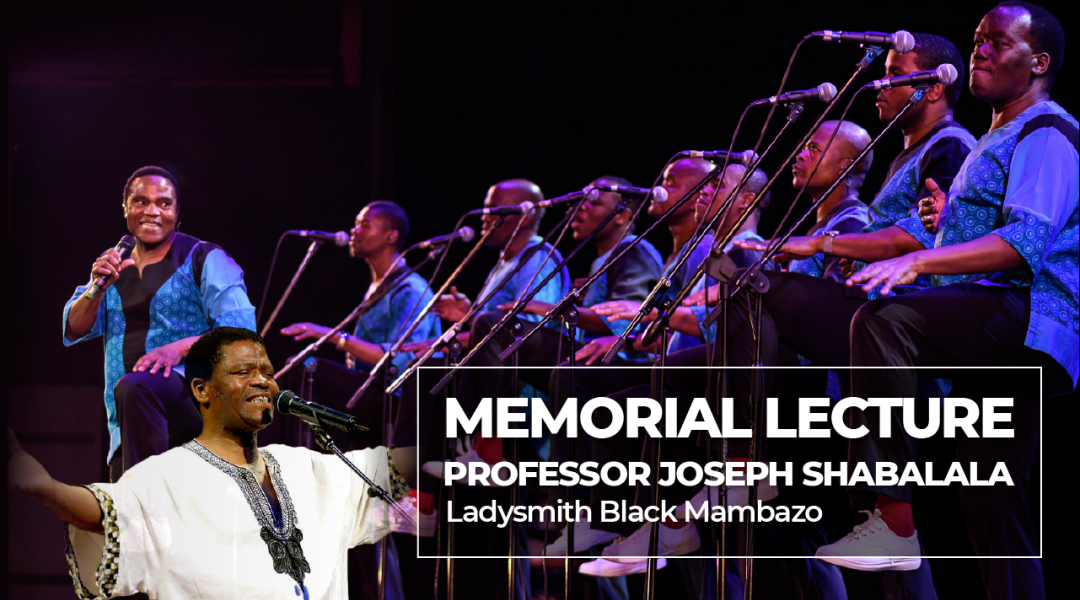 On 11 December, the Ladysmith Black Mambazo Mobile Academy in partnership with the University of Fort Hare’ will host a memorial lecture in honour and celebration of the life and times of Professor Joseph Shabalala –-founder of the multi-Grammy-award-winning Isicathamiya Music Group.

The lecture will be delivered by Dr Sipho Sithole, renowned award-winning Music Producer, and Cultural Practitioner. Prof Shabalala passed away on 11 February 2020 at age 79. The lecture forms part of several programmes planned by the Academy in honour of his memory.
Recently, on the 18th of November 2021, Professor Shabalala was honoured by His Excellency President Cyril Ramaphosa with the Order of Ikhamanga in Gold for excelling in the fields of arts, culture and music. A week later, on the 27th of November, the Kwa-Zulu Natal Government’s Executive Council unveiled a monument at the Ladysmith Cemetery in tribute of the legendary musician.
The group’s Manager and Academy Director, Mr Xolani Majozi said Ladysmith Black Mambazo chose the University of Fort Hare to host the memorial lecture based on the fact that the university is part of South Africa’s rich history. “UFH has produced many great academics and political leaders who have changed the landscape of our socio-political history to what it is today. Just like the legendary group, Ladysmith Black Mambazo which has over the years flown the country’s flag to nations of the world, University of Fort Hare epitomizes how great our country is to the nations of the world,” said Majozi.
The VC, Prof Sakhela Buhlungu said the university is honoured to be the host of the inaugural memorial lecture of a great African and exceptional musician. “Ladysmith Black Mambazo has inspired generations of music lovers at home and abroad. Their music has put South Africa on the world map. We are particularly proud to have been identified by the band to host this lecture.”
“I am also delighted to announce that we are in discussions with Black Mambazo about the archive of the band since its formation 61 years ago. We are hoping to make an announcement on the day of the lecture. All these interactions constitute a vote of confidence in our university and its Music Department led by global award-winning jazz maestro, Nduduzo Makhathini and staffed by a phenomenal team of Lecturers.”
The lecture will be held at the Miriam Makeba Arts Centre on the East London Campus. In light of the Covid-19 pandemic, the organizers have opted for a hybrid (Live + Virtual) event. Thus, only guests who have received personal invitations would be allowed inside the venue.
Guests will include dignitaries from the National and Provincial government, group members, Shabalala’s family and representatives from the university. A link to join the virtual event will be made available soon.
There will also be live broadcasts on several national television channels.
-Ends-
For Media Inquiries contact:
Mr Xolani Majozi
Manager: Ladysmith Black Mambazo
Director: Ladysmith Black Mambazo Mobile Academy
072 191 2790