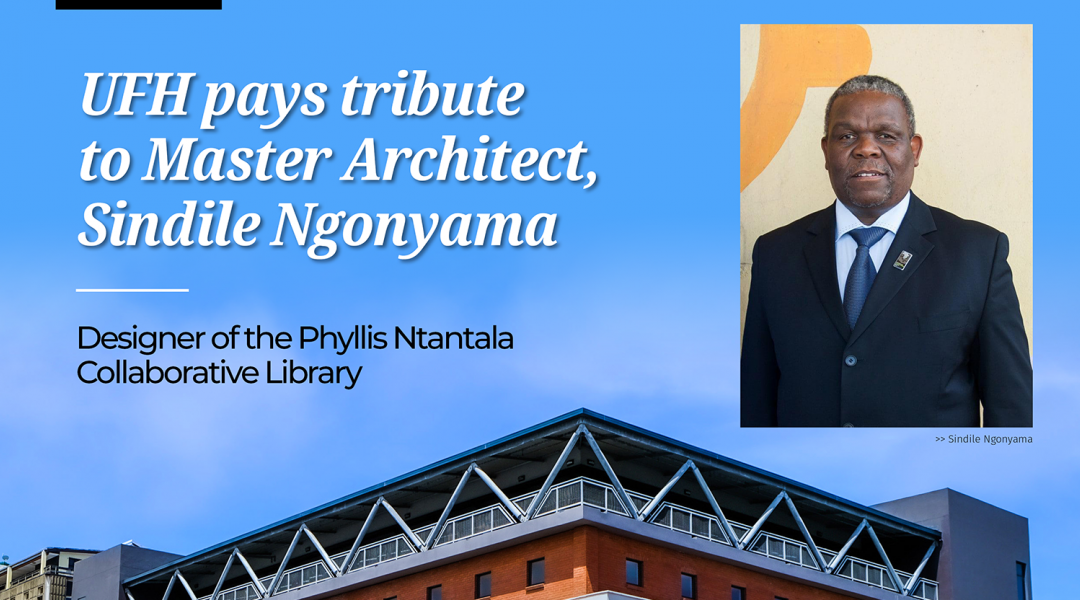 The University of Fort Hare joins the SA architect industry in mourning the passing of Mr Sindile Ngonyama, one of SA’s finest Architects and the designer of the Phyllis Ntantala Collaborative Library.

According to media reports, Mr Ngonyama born 1958, died last month (July). Leaving behind his wife and three children. “Despite many hardships, Ngonyama went to head up several associations and initiatives,” reported the Daily Dispatch. This includes being appointed as deputy president of the SA Black Technical and Allied Careers Organisation, founder of the Mdantsane Development Trust and his role as Director of Ngonyama & Associates (Pty) Ltd.

The Phyllis Ntantala Library is one of many breathtaking buildings/structures designed by Ngonyama & Associates.

First of its kind, the collaborative library is a joint project between UFH, University of South Africa (UNISA), Walter Sisulu University (WSU) and the Department of Higher Education and Training (DHET).

In 2019, the library won the highest award in the South African Institute of Architects (SAIA) Border-Kei Regional awards.

After winning the award, ThisWeek@FortHare interviewed Mr Ngonyama. He said:

“The building was conceptualized to ensure an end product which must at all times, provide a humane, user-friendly and inclusionary atmosphere.”  This objective was achieved because the building -  which caters for over 18 000 students from the three universities -  provides for social interactive spaces located at strategic spots on all floors.

During the interview, he expressed pride in the design of the library saying he felt a sense of personal fulfillment about the building and the end product it became.

In his memory, the UFH university community will forever treasure the Phylis Ntantala building and strive to uphold Mr Ngonyama’s vision of a humane, user-friendly and inclusive atmosphere.

May his soul rest in peace