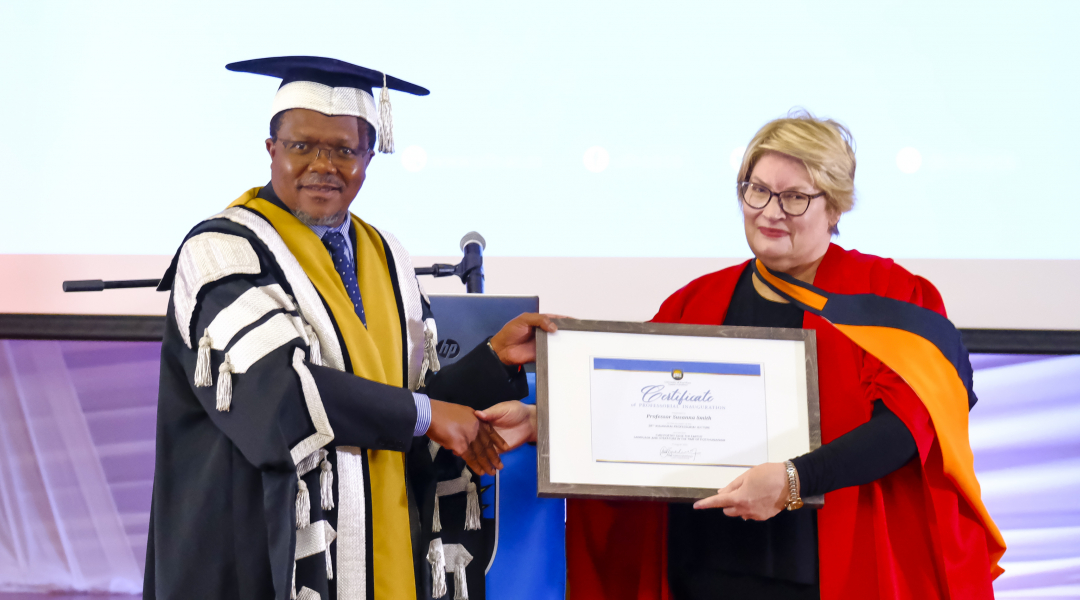 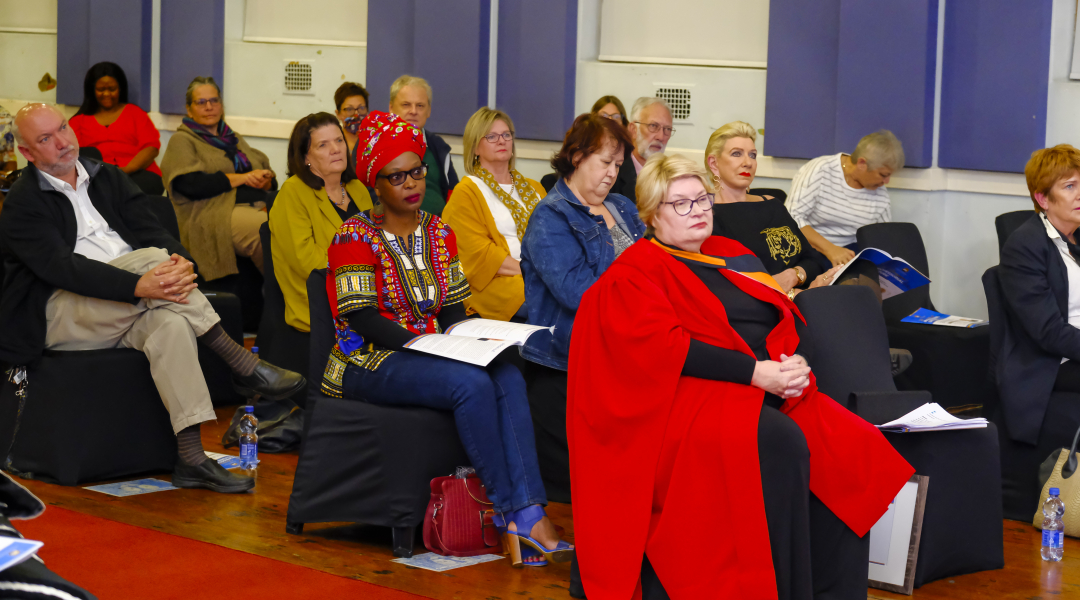 The Professor in Afrikaans Literature from the Afrikaans Department was delivering the 28th Inaugural Professorial Lecture on the 17th of August.  Prof Smith is the third UFH Academic to deliver an inaugural lecture this year, an event that signifies the official promotion to Full Professor. The 26th and 27th lectures were delivered earlier this year by Prof Blessing Aderibigbe from the Chemistry Department and Prof Munacinga Simatele from the Economics Department, respectively.

Titled: Can poetry save the earth? Language and Literature in the time of posthumanism, Prof Smith took the audience (virtual and live)on a journey of her academic career in Afrikaans literary from the time she obtained her Doctoral Degree in 1993, at age 32.

Her lecture gave an intriguing and insightful overview of the role of humanities and specifically of language and literature in current times.

“We live in a time of constant change, of which global warming and the threat to our natural environment are part of the many challenges we face as a society. In the era of the anthropocene and of posthumanist perspectives on reality, it has become essential that the humanities, and more specifically literature and poetry, play a role in the discourses in which we are involved,” she emphasized.

Centered around the focus of her research which is ecocriticism and ecopoetry, Prof Smith's lecture gave a deep reflection on the role of language on various fronts.

Prof Smith has published 10 articles in accredited and peer-reviewed journals, and delivered 12 conference papers, of which two are keynote addresses, one nationally, and the other internationally, at the University of Gent (to be in October 2022). She supervised 6 masters’ students and five doctoral students (of which three are completed). She was external examiner for 19 masters’ dissertations and 3 doctoral theses (UFS, US, UCT, NMU, NWU, UP, UKZN and WSU).

She also played a significant role in the planning of the first Language Policy at UFH.

Prof Smith is a poet and has published two solo poetry volumes, and poems in over 30 anthologies, of which 17 are school textbooks. Her poetry has during the past 20 years been prescribed at all school levels, both in Home Language Afrikaans and in Afrikaans First Additional Language, and has been included in Final Matric Exam Papers for many years. Her latest poetry reflects on the issues of ecology and environment and dovetails with her research niche area. A new volume of poetry is on the cards and is soon to be completed.

According to her: “Words make or break things. Words move people. Words move mountains. And every word uttered, every poem read, has the possibility of changing perceptions and changing directions. It has the possibility of entering the mind and changing attitudes and actions. Of rethinking where we are, what our motherland looks like, what the soil underneath our feet looks like, where we are going, and how we are living on this soil and this land. The right word, the right poem, listened to by an absorbing, willing mind, can change the world.”

“The author and the poet have to push the boundaries of reality, of altered bodies of selves and others, of human and posthuman, and in doing so, create an awareness of the survival and continued existence of both human and nonhuman.”

She ended her lecture with a poem titled: “hoe slap jy ben van beurden” addressed to the executive CEO of Royal Dutch Shell. According to her, she wrote the poem on behalf of the sea creatures and waters of the Wild Coast, amid the contentious seismic blasting plans by Shell which have currently been put on hold by the High Court.

Here is the recording of the session: https://www.youtube.com/watch?v=E7uccsHq2qM