A Passion for Music and the Community 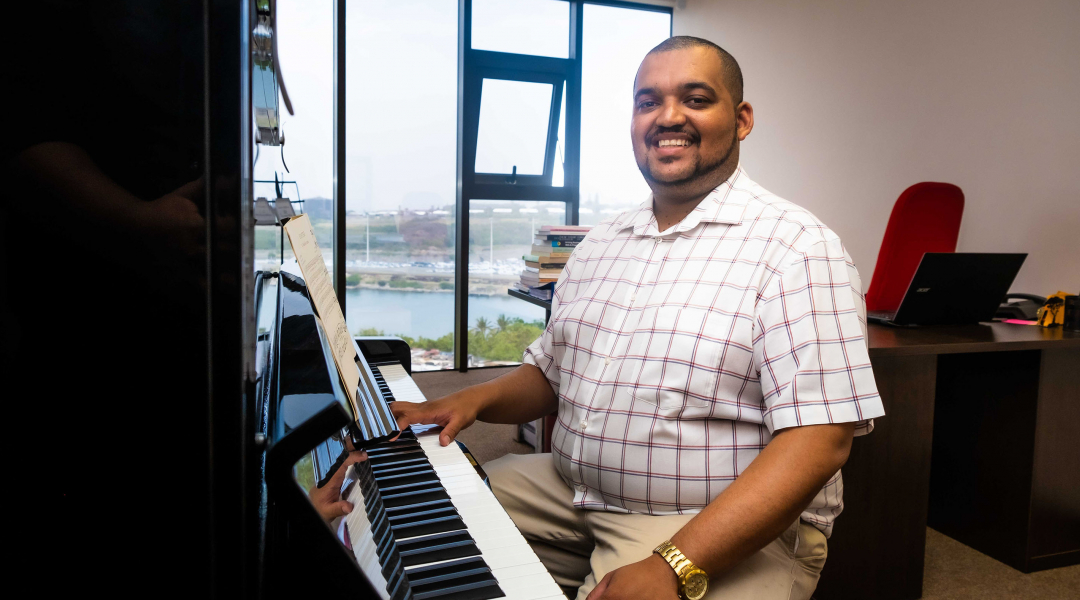 “Music is how I express myself, I cannot imagine my life without it.” These are the words of Dr Devandré Boonzaaier, Music Lecturer and Deputy Head of the Music Department at the University of Fort Hare.

On 31 October, Dr Devandré Boonzaaier, an accomplished organist, accompanist and conductor, walked away with the Vice-Chancellor’s 2018 Excellence Award in the Community Engagement Category.  This is a well-deserved accolade for the music maestro.

This Week @Fort Hare, spoke to Dr Boonzaaier at the Miriam Makeba Arts Centre where the music department is housed.  Suffice to say, a week after receiving the award, he was still beaming with excitement.

“It is a great honour and privilege to be recognised.  It is proof of how much I am valued.”

He has performed as a guest organist at large Moravian Music Festivals in Port Elizabeth and Cape Town. In 2017 he presented a research paper titled: “Moravian Music building bridges in South Africa” at the Christian Congregational Music Conference at Oxford University.

Dr Bonzaaier’s passion and drive for music started at the tender age of four years when he stood up and conducted the church choir. “Our church choir did not have a conductor and I was baffled by this and so decided to get up and start conducting”, he chuckled.

In addition to an impressive academic career and decorated achievements, Dr Boonzaaier also has a deep passion for community engagement. It is his love for the community that earned him the VC’s award. When he is not lecturing or supervising students, Dr Boonzaaier can be found either at a local primary school where he spends his time volunteering as choir conductor or organizing Christmas Concerts to raise funds in aid of mentally and physically disabled people.

In 2016, soon after joining the university, Dr Boonzaaier was requested by the principal of AW Barnes Primary School in East London to conduct the school choir. “There was no one to conduct the choir and I agreed without a doubt in my mind.”

Under his direction, the choir has bagged several awards including gold, silver and bronze certificates at the East London Port Rex Lions Eisteddfod in 2017, 2018 and 2019 respectively. He also participated in the ATKV (Afrikaanse Taal- en Kultuurvereniging) Applous Regional Choir festivals in 2017 and 2018 and received silver certificates.

His aspiration for the University of Fort Hare is to “develop an arts and administration programme that is the best on the African continent”.

With Dr Boonzaaier’s guidance, this is achievable.