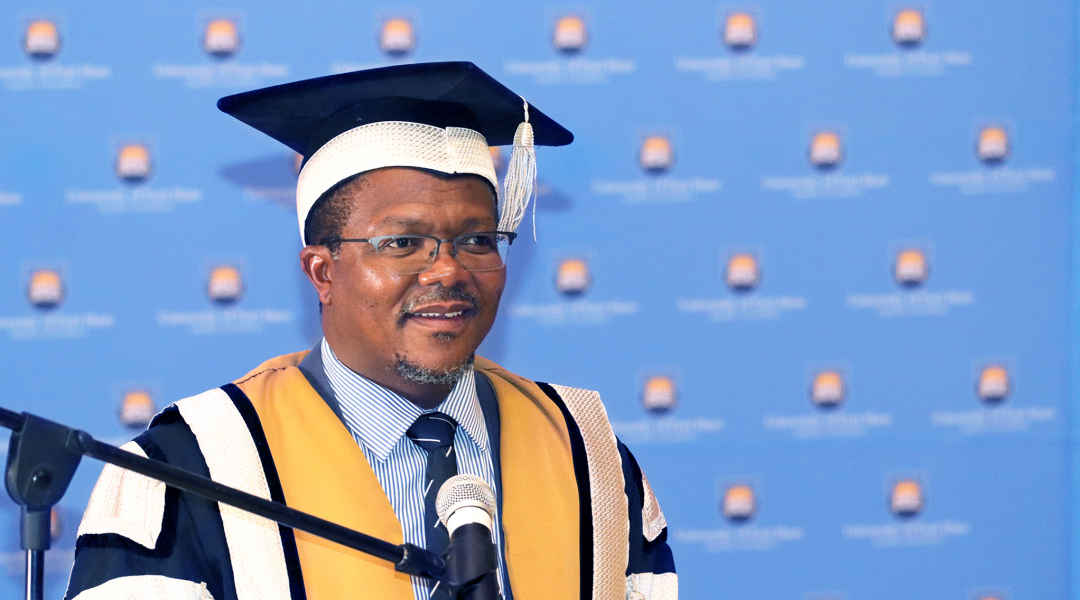 Delivering his fifth state of the university address, otherwise known as the Opening Ceremony speech,  Vice-Chancellor and Principal, Prof Sakhela Buhlungu officially welcomed the University of Fort Hare community to the 2021 academic year. For the first time ever, the event was held  at the historic Christian Union Hall located in the majestic Clock Tower Building on the main campus in Alice.

The event which was streamed live to other campuses and via YouTube,  was held under strict adherence to Covid-19 health and safety regulations.

The VC’s  address was set on three pillars:

Welcoming new students to the 105 year old institution, the VC encouraged them “to know every day that they are walking in the footsteps of leaders who have set high values. He urged them to make great use of each minute and pass their grades”.

“It is with gratitude that  I welcome back old students and staff at these trying times.  I want to take off my hat to this group for their fortitude, determination and resilience after the university saw dreams being extinguished as Covid-19 went on the rampage, claiming fatalities, some within the university community”, said the VC.  At some point there was concern that the UFH would not be able to conclude the 2020 academic year.  However, we finished the year successfully and on schedule.  He thanked frontline staff who braved the pandemic and took care of university property.

Prof Buhlungu took a swipe at the troubled decade that culminated in the independent assessor’s report which identified failure of internal controls,  a culture of self-enrichment and the university being a source of income for some.

All of the above “contributed in compromising admission policies, staff and students trading with the university,  serious glitches of immigration laws, unsavory relations with service providers and abuse of university property.  The moral fibre of the university took a knock as some good men and women were silenced, people failed to show courage and report irregular activities”,  he lamented.

The VC also reflected on the recent Bhisho saga that has “seen the university in the media for all the wrong reasons. It’s a shame that the Professor (Ijeoma) had become a law to himself”.  He explained that law enforcement officials had to visit all university campuses to drill down more into the professor’s activities.   “The university is burdened by low trust dynamics and several political sideshows”, he said.

Prof Buhlungu said the university should see beyond its setbacks and continue to produce knowledge, demonstrate resilience, attract the best academics and support services staff. He hailed the cutting edge research outputs that has seen the university being awarded another SARChI Chair in Sexualities, Genders and Queer Studies.

Emerging out of Administration

During administration, the university worked very well with the two Administrators  (Prof Loyiso Nongxa and Mr Nhlanganiso Dladla) to craft a turnaround plan in response to the independent assessors’ report.  “We are poised to meet each and every element of the turnaround plan”, said the VC.  He was confident that Council would be pleased with the strides made by the university to respond to the independent assessors’ concerns.

One of several imminent shifts towards renewal is the unbundling of the academic affairs portfolio to create a new Deputy Vice-Chancellor for Research, Partnerships and Innovation.  We need to raise the number of research chairs. The university is looking to launch a broad base research theme in order to energise the research unit (GMRDC) and attract more funding.

The university is in the final stages of recruitment to make the following senior appointments:

In March 2021, the university announced completion of the state of the art student village on the Alice campus. The project is currently the biggest in South Africa and will accommodate 65% of students who are based in Alice.

During the winter graduation in June the university is expected to confer three honorary doctorates  to:

Prof Buhlungu encouraged universities to honour people while they are still alive and it should be people who have made a mark in society.

Towards New Heights: A Shared Responsibility

“Everyone should be conscientised to be aware of their contribution to the growth of the university – regardless of their position or job description. All of us must grow and nurture these young people”.

Discussions that will culminate in the adoption of a new 5-year strategic plan for the university from the beginning of 2022 are already underway.  The VC encouraged all of us to use such discussions to say  to ourselves:  “How do we want to renew, reimagine, revitilise this institution?”

He cited infrastructure refurbishment and digitization as areas that require urgent attention during the period of renewal.

Fort Hare needs sound financial management.  The CFO will design a new plan that will see all departments as costs centers, and in order to build reserves, UFH will have to take tough decisions”, he said.