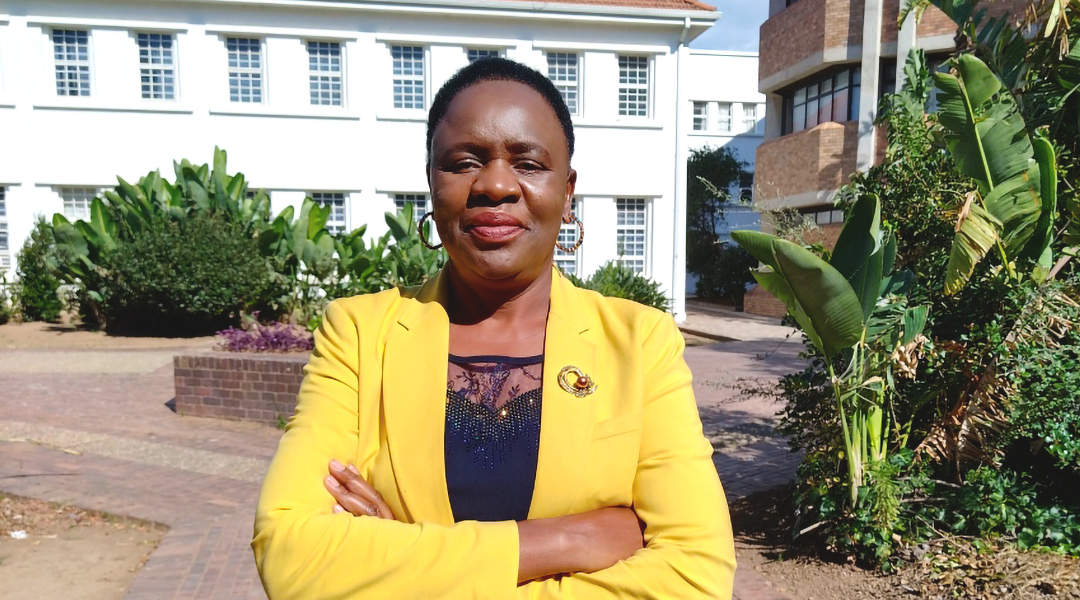 A teacher by profession and Researcher by passion, Dr Leocadia Zhou’s career in the education sector and academia, which spans over three decades, recently became full circle when she was awarded a C-3 Rating by the National Research Foundation.

Her rating brings the number of newly-rated Researchers at UFH to ten.

Dr Zhou is the Director of the UFH Risk and Vulnerability Science Centre (RVSC) under the Faculty of Science & Agriculture.  The Centre was initiated in 2011 by the Department of Science and Innovation (DSI) and the National Research Foundation (NRF); it is one of five flagship entities under the Global Change Research Plan's (GCRP) framework to direct global change research investments in South Africa.

She started her career as a teacher. Between 1990 and 1997, she taught Cambridge O and A-level Geography as a full-time teacher in Zimbabwe at Mandava High School.  “Being a teacher laid a strong foundation for my quest to improve academically,” she said.

In 1997, she enrolled for a Bachelor of Arts degree majoring in Geography at the University of Zimbabwe.

Her journey at UFH started in 2001 when she enrolled for an honours degree in Environmental Science thereafter, she progressed to do her masters and doctoral degrees in Geography and Environmental Sciences at Fort Hare. Over the years, 2004 and 2021 she has held the following positions: Intern at UFH’s Govan Mbeki Research & Development Centre (GMRDC) from 2004 to 2009; Post-Doctoral Research Fellow at Risk and Vulnerability Science Centre (RVSC) in the year 2010; Manager of Risk and Vulnerability Science Centre (RVSC) from 2011 up to 2014. She was appointed Director of RVSC in 2015.

Her research interests are in areas related to climate change management.. According to her, global warning issues are topical and a betterfuture can only be feasible through mitigatory research interventions. Calamities and disasters can be averted through the adoption of smart green technologies.

“I have strong vested interests in making the earth a better place to live and improving human livelihoods. Thus, my research focus is based on the conscious acknowledgment of the fact that the increasing incidence of extreme climatic events and global warming poses significant challenges that need to be confronted and addressed by promoting the adoption and implementation of scientifically informed coping strategies.”

As a Researcher, Dr Zhou strongly believes her calling is to identify gaps and proffer solutions. As such she continues to demonstrate a passion for research in the following:

She is an accomplished researcher who has published over 50 peer-reviewed articles and four book chapters in internationally renowned journals. “To my credit, l have also recruited, supervised and, or co-supervise graduate students to completion of their studies and have mentored subordinates to be better leaders of tomorrow.”

Currently, she is working on six research projects listed below:

The University Staff Development Doctorate Programme (USDP) coordinates by the RVSC and administers the USDP programme in collaboration with the University of Arizona and Penn State University, United States of America and UCT to support four junior staff members in the Faculty of Science & Agriculture to work on their doctoral studies on climate change-related issues.

Community Engagement project: Engaging South African farmers on climate variability and change through the use of climate services. The research will focus on two case study sites, the Western Cape Province and the Raymond Mhlaba Local Municipality in the Eastern Cape Province.  Collaboration partners are UCT, WITS & ARC.

“Impacts of land use and land cover changes on water quality and quantity in key water sources of Limpopo and the Eastern Cape, South Africa provinces.” A collaboration of three RVSCs (UL, WSU and UFH sponsored by WRC)

Commenting on her newly acquired rating, Dr Zhou said: “I am greatly humbled. This achievement is a stimulator and confidence booster. It is a culmination of hard work and team effort and l salute all those who supported me towards the attainment of this rating. I now have a strong conviction that nothing beats teamwork. I take this award as a springboard to greater heights on my committed interest to contribute to the enhancement of our capacities to cope with the adverse effects of climate change.”