Getting To Know… Dr Ellen Rungani: the "Bubbly Academic" 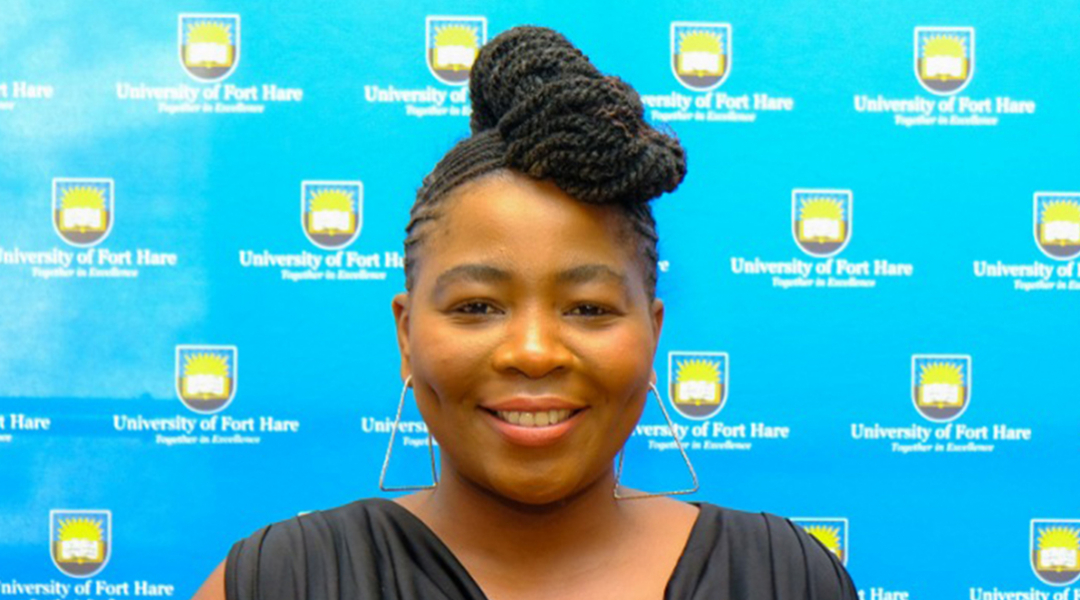 Born in Zimbabwe to parents who are war veterans, Dr Ellen Rungani has certainly earned her UFH stripes in academia.  She joined the university as a student in 2004 but now serves as the acting Deputy Dean for Teaching, Learning and Community Engagement in the Faculty of Management and Commerce. She was appointed to this position in February this year, after serving as Senior Lecturer as well as Head of the Business Management department for six years.

During her 12-year career at UFH she has held several leadership positions including an appointment in 2020 as the Chairperson of the institution’s first-ever Gender-Based Violence Task Team.

She has a BCom, Honours and Master of Commerce Degrees from UFH and a PhD in Business Management from the North-West University.

ThisWeek@FortHare spoke to the “bubbly academic” – as her students and peers describe her.

I was born in a place called Nyika at the heart of Masvingo province in Zimbabwe. I have spent most of my life using my personal and career experiences to help students redefine their destiny through education and knowledge creation.

As a daughter of two war veterans who met in exile in Mozambique (retired General VTC Rungani and Honorable Anna Rungani), I am affectionately known as the ‘General’. This is due to my militaristic approach when dealing with difficult issues.

My greatest strength is my bubbly personality with a pinch of craziness. When in this state, I am known as “MaEllie or Dr E.”

I am an energetic, ambitious person who has developed a mature and responsible approach to any task I undertake, or situation that I am presented with. I strive for Excellence!

Over the years, I have held several leadership positions in the Business Management department. From 2013 to 2014 I served as its Deputy Head of Department (HoD) and from January 2015 until February 2021 served as the HoD.

In 2019 (during my tenure as the HoD) I also acted as the Deputy Dean of the Faculty of Management and Commerce where I was responsible for the Faculty’s Teaching and Learning and community engagement portfolio.  I have since vacated the HoD role and now serve as the Acting Deputy Dean for Teaching, Learning and Community Engagement.

Tell us more about your projects or engagements outside the classroom or the office?

Outside the classroom and office I have been involved in a national community engagement project through Enactus South Africa.  In this project, I have received several accolades including being named as the Faculty Advisor of the Year - an award that is given to the best mentor amongst participants from the 26 SA public universities.

In 2019 I was selected as a fellow in the first cohort of the Future Professor Programme, a Department of Higher Education and Training initiative which provides mentorship and support to future professorial candidates.

I have been a member of all faculty committees in Management and Commerce and several university committees where I represent my faculty. In May 2020, the UFH Management Executive Committee entrusted me with the role of leading the GBV Task Team.

For those who do not know, could you spell out your role as the GBV task team chair?

According to the terms of reference of my appointment, the Chairperson’s key focus areas are:

The country has been battling the scourge of GBV, to an extent that it has been coined as a “second pandemic” by President Cyril Ramaphosa.  What is your stance on GBV?

In order to eradicate GBV and femicide, we need to uproot gender inequality. We (including men) need to address toxic masculinity. I believe that the time to act against any form of GBV is now.  It is up to you and me to be change agents by being part of a generation that ends gender inequality and gender-based violence by saying enough is enough!

As GBV Task Team Chair, which areas have you identified as progressive and which ones require strengthening in order to completely do away with GBV on campus?

However, we need to strengthen the following areas:

What are your broad aspirations for the University of Fort Hare?

For the university to have a secure, caring and nurturing institutional environment where everyone is able to pursue their studies, careers, duties and other activities free from all forms of GBV.

As such, we all need to curb gender-based violence and ensure that the university provides a safe environment for both staff and students. I believe the university has the potential to create an atmosphere that fights for equal social, political, and economic rights for men and women.