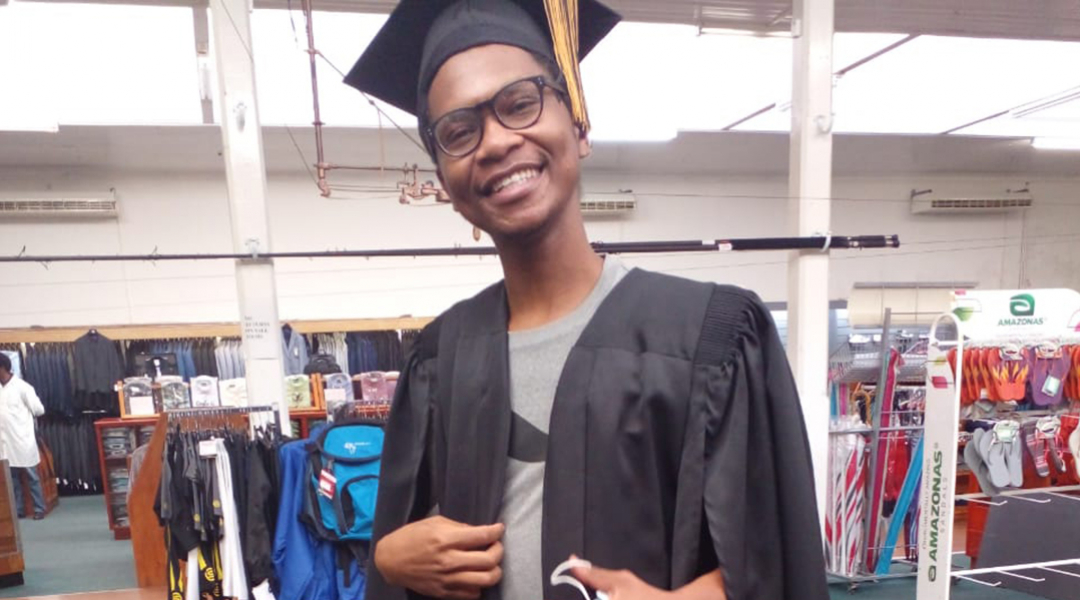 Not even multiple seizures, three strokes and countless hospital stays could prevent Siphamandla Boyce from obtaining his Bachelor of Commerce in Law (BCom Law) degree.

The 23-year-old from Libode in the Eastern Cape suffers from a rare neuro autoimmune disease called Behçet's disease. He graduated during the university’s 2021 Hybrid Winter Graduation ceremony held on 21 June.

A series of health challenges

Mr Boyce enrolled at UFH in 2016 at age 18, for a BCom Law degree at the Nelson R. Mandela School of Law.

“My goal was to do my BCom Law over three years and thereafter enrol  for a Bachelor of Laws (LLB).”

However, this goal was derailed when, during his second-year of study in 2017,  Boyce experienced a severe headache. “I was rushed to hospital where I ended up having seizures. Brain scans were conducted and that is when the swelling in my brain was discovered”

“The doctors did not know the cause of my illness and I was given heavy medication for three possible causes.”

After he was discharged from St Mary's hospital in Mthatha his condition worsened, forcing him to drop out of university.

“I spent the entire year of 2017 in and out of hospitals, having multiple seizures, headaches and having back meningitis.  I also suffered two strokes in that year.”

He was admitted to several hospitals as Doctors tried to find a diagnosis for his condition.

In 2018, with assistance from Ms Kunjuzwa Mkiva,  Law Faculty Manager, he was able to complete a late registration application to catch-up with his studies. However, when mid-year examination approached, he relapsed.

“I was rushed to St Dominic’s hospital. The headache was back, I was attacked by another seizure followed by a stroke. I was transferred to a specialist in Durban where multiple tests were conducted. One test came back positive for meningitis. Doctors suggested a brain biopsy and finally, there was a diagnosis for my condition. I was relieved because, for the first time, I knew what was wrong with me.”

”After I was discharged from hospital I went back to class to finish my 2nd semester. In 2019, without any funding, I completed the outstanding modules from the second-year. My results were so good that I was awarded a certificate for academic excellence during the Faculty’s Awarding Ceremony.”

Despite the obstacles mentioned above, including losing his mother to colon cancer in 2020, Boyce's perseverance and positive outlook on life carried him through his final year.

“I lost my mother and I had no funding. However, with the assistance of  Mr Sam Musschenbroek , UFH Disability Unit Coordinator, and the then  East London SRC Premier Mihla Hanise, I was able to find a sponsor to pay for my studies.”

Boyce is currently doing his 1st year LLB degree and moving closer to achieving his goal.

“This is my story and I hope it inspires others that no matter how many setbacks you experience, giving up is not an option!”