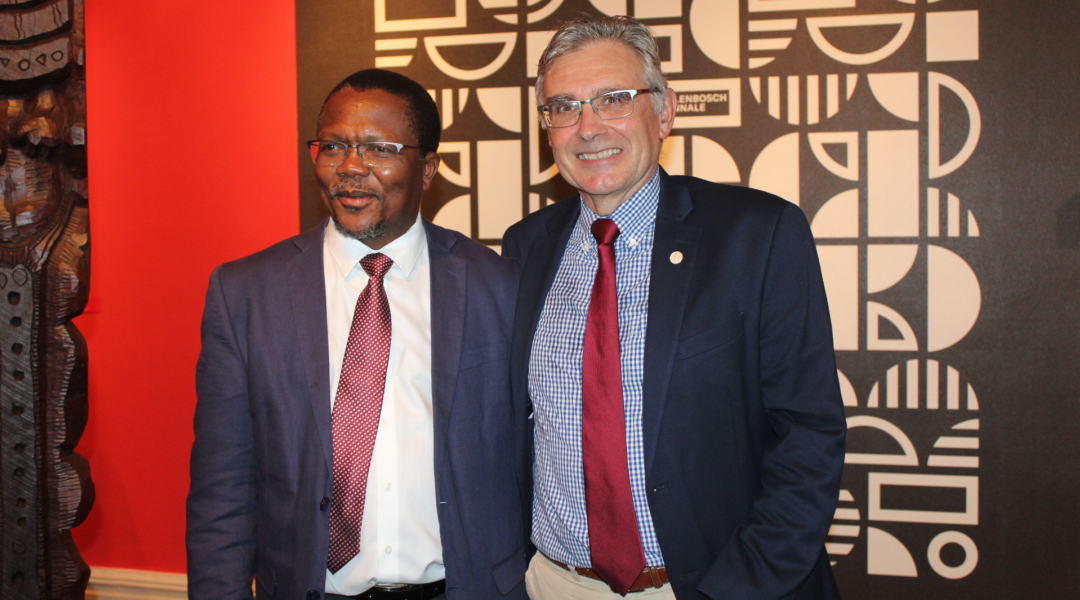 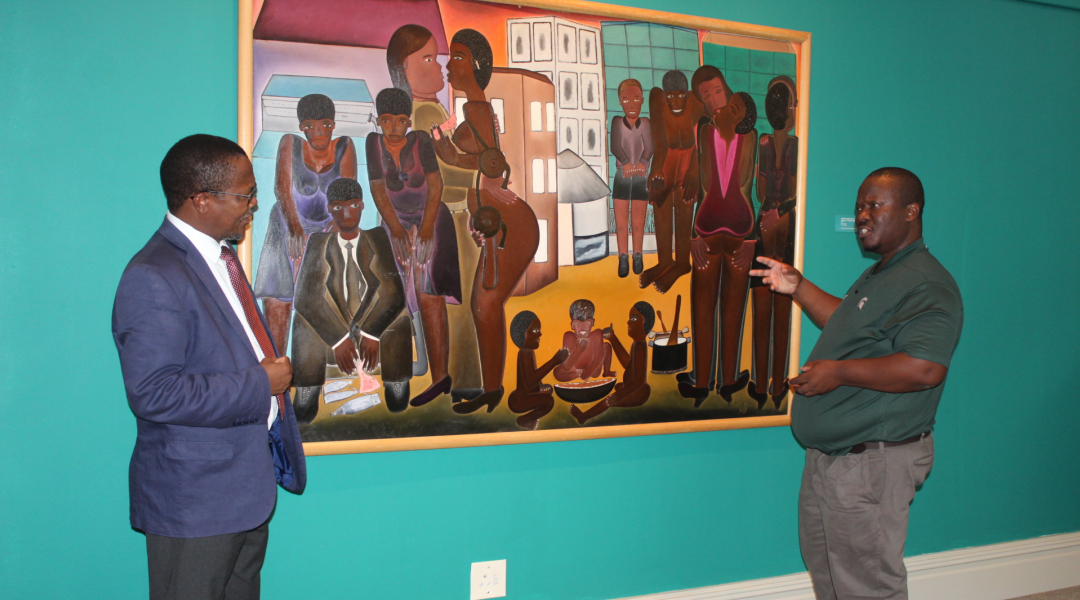 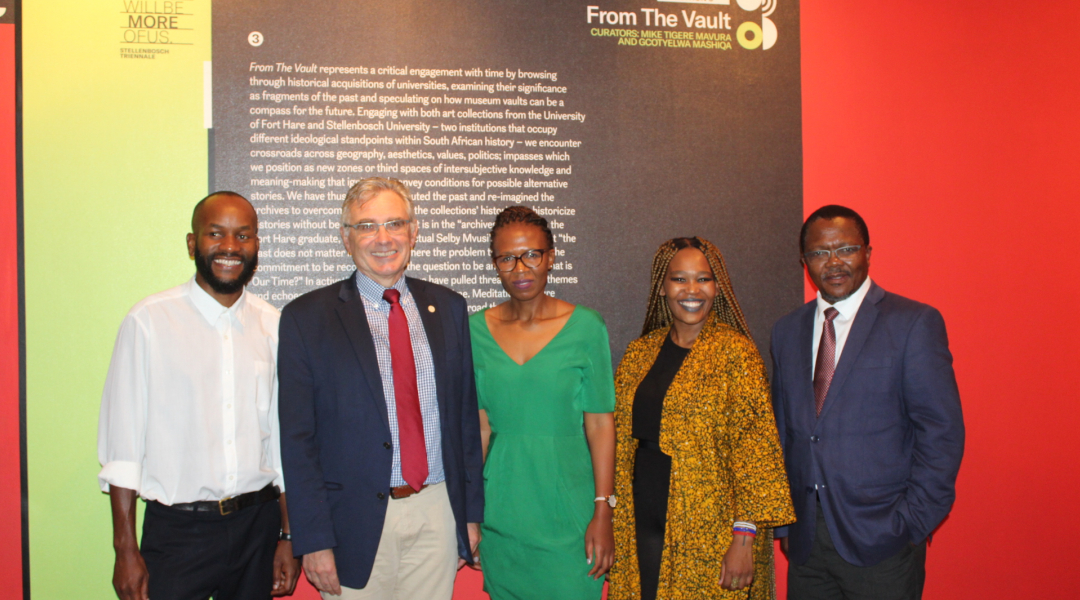 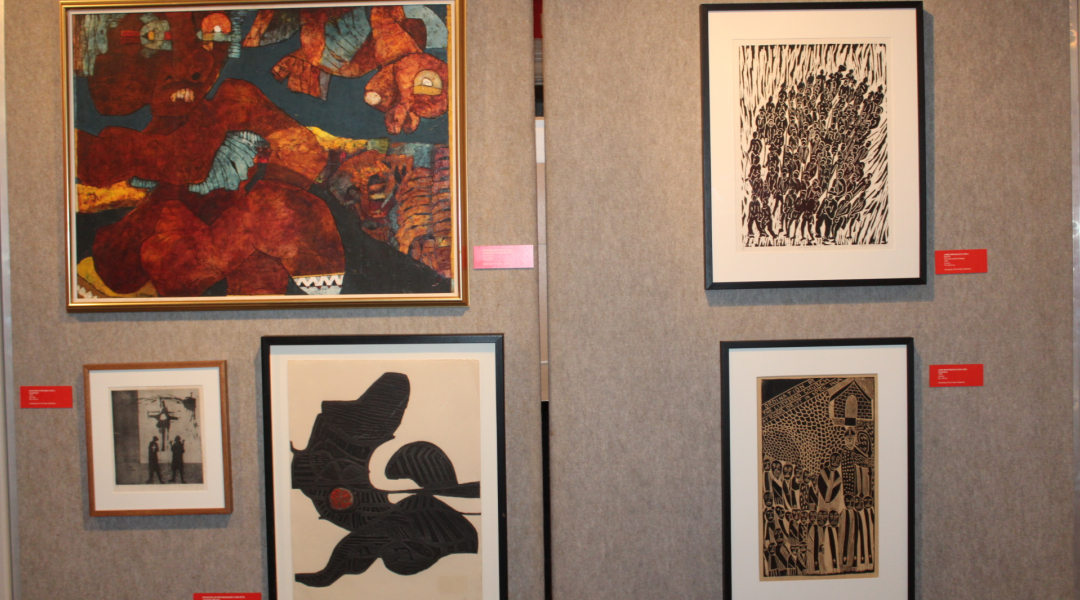 The two Vice-Chancellors,  Prof Wim De Villiers (SU) and Prof Sakhela Buhlungu (UFH)  shared the podium as keynote speakers at the launch event on 20 February.  Both commended their institutions for having agreed to the joint project.

Prof de Villiers said the exhibition was extra special as it brings together,  works from the opposite sites of the spectrum -  “valuable works, seldom seen in public and never before seen together.  The exhibition opens our eyes to see what the two universities have in common and not what sets the two institutions apart.”   He said the collaboration was a step closer to many more meaningful collaborations between the two institutions.  Prof de Villiers acknowledged SU Museum curator, Mr Ulrich Wolff and Museum Director  Mr Bongani Mgijima  for envisioning and contributing to the success of this momentous display.

Addressing artists and art lovers at the launch, Prof Buhlungu spoke passionately about UFH’s art collection. “For us, our artworks are our ambassadors. Even if you have never set foot at UFH’s Alice campus, but you will know two things. Firstly, it is a great university and secondly, it has a great art collection.”  An avid supporter of classical artworks,  Prof Buhlungu said art is doing what many people hesitate to do, or fear to do. “It speaks a language that everyone can understand. The artworks displayed here promote dialogue.”  He also took the opportunity to encourage more collaborations in other areas between the two universities.  “If the Museum can do this and provocatively put it before us, surely we can explore more areas of collaborations.”

This historic exhibition examines the art collections from both universities, dating back to the 1970s. Altogether, 132 rare art pieces that range from paintings to sculpture and linocuts have beautifully decorated the walls and floors of the Stellenbosch University Museum.

According to the curators, Mr Mike Tigere Mavura and Ms Gcotyelwa Mashiqa, the exhibition sought to exhume archives and engage with the buried museum collection.  It aims to mute the past and view the artworks as a critical resource to contextualise and map contemporary society and culture.

The UFH art collection houses some of South Africa’s most renowned black artists such as Gerard Sekoto, George Pemba, Dumile Feni and Gladys Mgudlandlu and many more. From the Vault is the second major recognition of the  UFH collection.  In 2019 between February and April, 180 pieces went on a three-month display at the Standard Bank Art Gallery in Johannesburg.

The exhibition is sponsored by Strauss & Co and will run until  30 April 2020. Entrance to the gallery is free.