Barely a week into her appointment, the UFH Foundation Development Director, Mrs Nokulunga 'Lunga' Mnqeta has already mapped out a plan on how she plans to execute her mandate.

Lunga assumed duties on 1st October to establish the university's fundraising unit. Her main responsibility is to raise much needed  3rd stream income for the university.  According to her, she intends to have a draft fundraising strategy in place by the end of next month. She will also embark on a revival of relationships with alumni.

“I have drawn-up a process map on how I am going to develop the strategy. Currently, I am busy doing a diagnostic report and will be meeting with the university leadership including board members of the Foundation.”

“In week three I will focus on doing a needs analysis and engaging the university's key staff and leaders. I envisage a strategy workshop and to produce the strategy thereafter.”

A qualified scientist, she has an illustrious career that spans over three decades.  During this time she has held several strategic positions in both government and state-owned entities. Lunga boasts an impressive academic resume and brings a wealth of leadership experience, ranging from marine and coastal management, environment and agriculture, forestry as well as governance. She has a Diploma in Forestry from Fort Cox College, a B.Sc in Agriculture from UFH as well as Honours and Master's Degrees in Agriculture from the University of Pretoria.

She started her working career as a Forestry Scientist in the late 80s. Having worked as a Manager at the Department of Water Affairs and Forestry and the Council for Scientific Industrial Research (CSIR), Lunga has experience in research and management and commercialization of research output.

Before joining the university, she was the Managing Director of Leaf Services.  Previously, she served as the CEO of the Eastern Cape Tourism Parks Board as well as CEO of Amathole Development Agency. She is also a Chartered Director with the Institute of Directors of South Africa.  Between 2016  and September 2019, she served as Board Chairperson of Amatola Water and was a former board member of the SA Biodiversity Institute. Currently, she serves as a member of the Border Cricket Audit Committee.

In order to successfully execute her role, Lunga says she will rely on the university community to embrace and support all development initiatives. “We need to spruce up the image of the university to be aligned with its brand. We also need the executive leadership as well as external stakeholders and alumni to support the university's initiatives,”  she said. 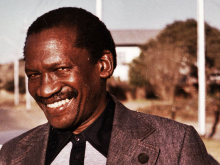