Welcoming winter with a sale 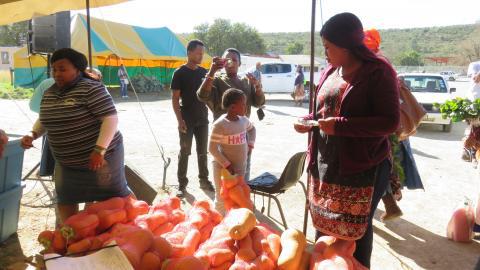 After being suspended for two months due to unrelated service delivery protests, the Keiskammahoek Farmers’ Market resumed on the 1st of June 2018. As before, farmers marketed a range of products at affordable prices, which consumers snapped up quickly.
The products ranged from butternut, cabbage, pumpkins and other veggies; to homemade cheeses and fresh milk; to freshly slaughtered broilers and pork; to assorted handicrafts, in particular aprons and doeks. A number of farmers and farm co-ops participated, including the Lower Zingcuka Farmers Co-op, which sold cabbage harvested early the same morning; and Mr Hlwaya and Mr Katwa, who sold butternut that they had harvested the previous day.
Whereas previously each market day surpassed the one before it in terms of amounts of produce on offer and numbers of shoppers, last week’s market was about the same as the one in March, which was a bit disappointing. This is not to say that it was not a success, but the organisers still regard the market as far from its actual potential. As usual, the event was advertised by means of posters and radio adverts. However, perhaps the fact that this was the first market since March was a problem; almost all of the produce was sold, but not quite.
Still, interviews confirmed that the market serves not only the interests of the farmers, but also those of consumers. One gentleman interviewed came to the market after seeing the poster next to his place of work and remarked that “the prices are reasonable and the products are better than the ones you would get from the supermarkets”.
As with the earlier market days in Keiskammahoek, last week’s event was a collaboration between the Department of Rural Development and Agrarian Reform (DRDAR), the Keiskammahoek District Farmers’ Association, ARDRI, Umtiza, and Ntinga Ntaba kaNdoda. ARDRI’s participation in these farmers’ markets was driven by findings from a research project funded by the United States Department for International Development (USAID).
The next farmers’ market in Keiskammahoek will be on 1 July 2018.