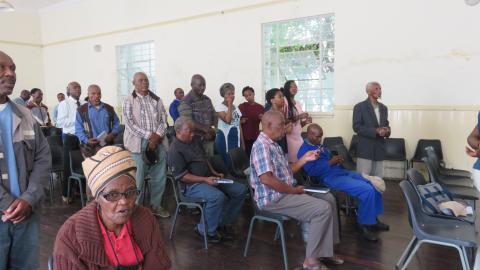 The Agricultural and Rural Development Research Institute (ARDRI) of Fort Hare, the Raymond Mhlaba Farmers’ Association, and the Raymond Mhlaba Local Municipality, hosted the second in their series of public dialogues on rural development on 7 June 2018 at the Alice Town Hall. The topic for this dialogue was Farmer Support Services.

By way of background, Raymond Mhlaba Local Municipality is home to thousands of farmers, some of whom depend on farming for income, others for food, and some for both. Many farmers look to government for support. What do we know about the impact of support to farmers in Raymond Mhlaba? How much is spent on this support, how is this decided, and what is being accomplished?

The speakers presenting on behalf of the government departments gave extensive presentations about the programmes of their respective departments. The presentation from the Department of Rural Development and Agrarian Reform emphasised that they prefer to support smallholder farmers who have industry-based partners who can help then sell their produce. This was met with concern by some of the farmers present, who argued that they have little chance of linking up with such partners.

In summarising the presentations, Dr Jara asked an important question: “How can we (smallholder farmers) help government officials in putting pressure on the government to increase the national budget allocated to smallholder farmers?” This was a line of thought that was welcomed enthusiastically by the audience and was discussed at length.

Although the dialogue was well attended, the partners need to revisit the approach. As much as farmers do seem to value hearing what their government departments are doing, the challenge was that the large number of presentations left too little time for actual discussion. The other disappointment was that the dialogue revealed very little about how budgeting decisions are made regarding farmer support, and in particular how much money is allocated for this purpose to Raymond Mhlaba Local Municipality, and how it is used.

We look forward to the next public dialogue, whose details will be communicated in due course.