Promoting smallholder agriculture in the Eastern Cape: a practice and policy dialogue 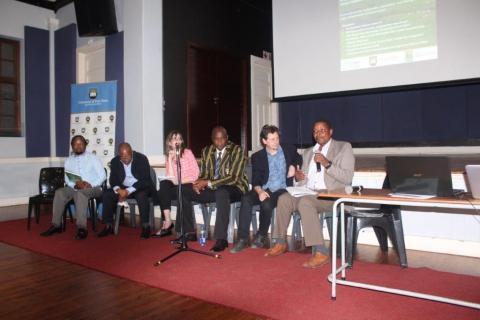 Agriculture has long been cited as central to solving South Africa’s rural unemployment crisis, while also being identified as the backbone of rural development. The National Development Plan of 2012 popularised the idea that, if properly supported, agriculture and its linked sectors could contribute 1 million new jobs by 2030. Notably, most of these jobs would not be in large-scale commercial agriculture, but rather among smallholder farmers, especially those in the former homeland areas and on land reform land, be they subsistence producers or commercial-oriented full-time farmers.On 9 March 2018, stakeholders came together at UFH’s East London campus to share observations and ideas as to whether and to what extent the vision of smallholder-led development is happening in the Eastern Cape. The event was co-hosted by the Eastern Cape Rural Development Agency (ECRDA), the University of Fort Hare, and the Center for Integrated Agricultural Systems of the University of Wisconsin (USA).

The event was well attended by practitioners, policymakers, academics, and students. Presenters included: Mr Mxolisi Mda, a maize farmer associated with one of ECRDA’s projects in Mbizana; Mr Sinelizwi Fakade from Grain SA; Mr Mpumelelo Ncwadi, an independent consultant; Prof Abbyssinia Mushunje of UFH; Prof Michael Bell and Dr Valerie Stull from the Center for Integrated Agricultural Systems; and Mr Wiseman Goqwana from the Department Rural Development and Agrarian Reform.The general feeling from the dialogue was that although progress was being made, much of the potential of the Eastern Cape’s smallholder sector remains unfulfilled. Even while some of the marketing challenges are being addressed, there remains a large amount of under-utilised land, and questions of best practice remain regarding the role of group-based projects and partnerships. Further engagement is needed to find solutions to the many challenges that continue to hinder the sector.